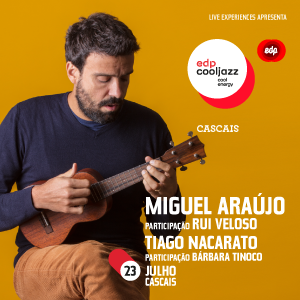 Miguel Araújo's musical relationship with Rui Veloso has a long history. They are two pillars of Portuguese music of the last decades and will perform at EDPCOOLJAZZ in a unique concert specially designed the Hipódromo Manuel Possolo in Cascais. It is also on the same night that Tiago Nacarato invites Bárbara Tinoco for a special participation.

Miguel Araújo marks the relevance of Portuguese music. An unavoidable name, the artist from Oporto is one of the unmistakable voices of the national music panorama. The author has 4 albums edited solo: "Cinco Dias e Meio" (2012), "Crónicas da Cidade Grande" (2014), "Cidade Grande ao Vivo at Coliseu do Porto (2015) and " Giesta "(2017)." Anda Comigo ver o Aviões "," Maridos das Outros "," Pica do Sete " and " Dona Laura " are some of his best known compositions. "Sangemil" was the theme that brought together Miguel Araújo and Rui Veloso, with a song by Araújo a that Rui Veloso lent his voice and electric guitar. On July 23, Miguel Araújo plays at EDPCOOLJAZZ and for the concert, invites one of his heroes: Rui Veloso.

Tiago Nacarato and Bárbara Tinoco crossed their paths through composition. Tiago Nacarato edited his first album, “Lugar Comum”, having entered directly to the National Best-Selling Albums Top. The song “A Dança” was nominated for the Golden Globe for 2018's Best Song. The connection with Bárbara Tinoco comes when Nacarato composed the recently edited the theme “Sei lá”, with music and lyrics for her.