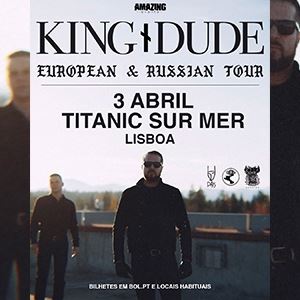 King Dude
Todas las actuaciones de King Dude At Titanic Sur Mer actuaciones
TJ Cowgill is KING DUDE since 2010, when My Beloved Ghost, the Seattle musician's 1st EP, was released. 10 years after its first release, KING DUDE will return to Portugal for a concert in Lisbon (Titanic Sur Mer) that promises to be a revisit to all stages of his career, represented in the 7 albums released so far.